Circassian activists: The Circassian flag is symbol of unity 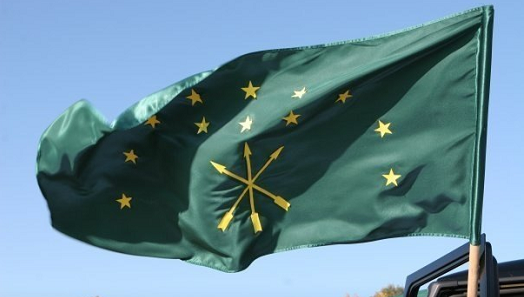 25 April 2017, residents of republic of Adygea, the Kabardino-Balkarian republic and Karachay-Circassian Republics (KBR and KChR) have celebrated The Day of the Circassian Flag with marches, motor rallies and participation in dance games “Adyge Jagu”.

The Day of Circassian Flag is celebrated by Adygs around the world on April 25. The Circassian Flag is one of the main symbols of the Adyg (Circassian) nation. It is a green rectangular field, on which three crossed golden arrows and 12 golden stars are depicted.

The symbolism of the Circassian Flag was explained in a conversation with the "Caucasian Knot" correspondent by Barasbi Bgazhnokov, Doctor of Historical Sciences and an employee of the KBR’s Institute of Humanitarian Studies.

"It is believed that 12 stars on the flag symbolize 12 Circassian tribes, but this is not true. In fact, in the early 19th century, there were more than 20 such tribes, but by the end of the Caucasian War they were less than 12. The idea was to use this symbol: 12 parts of the whole. The Circassian language has an idiom: 12 parts of the whole body, that is, there is a whole, consisting of 12 parts; thus, 12 has a symbolic, not literal, meaning," said Doctor Bgazhnokov.

He stressed that the arrows depicted on the flag "symbolize peace, not war." "Three arrows are a symbol of peace, not war. When a Circassian went to the reception, paid a visit, or went to a wedding, he was armed, but he took three arrows in such cases. But when a Circassian went to a battle or a fight, he took 30 arrows," said Barasbi Bgazhnokov.

Adyg activists from Moscow, KChR and KBR noted in the conversation with the "Caucasian Knot" correspondent that "Circassians need the today's celebration."